Xenophobia out now, Kindle and paperback.

"The cold depths of space have always been the perfect venue for great horror stories, never more so than in Xenophobia, where a fighting force finds itself confronting the deadliest of terrors. Entertaining, brutal, and shocking, this is a must-read for the darkest, coldest of nights."

This is one of my favourite things to happen in writing to date. I met Tim years ago, and I fan boyed a bit so didn't say much, but he was lovely and gracious and still is. It's not everyday an NYT bestselling author agrees to read a book of mine, and the author who wrote the Netflix movie 'The Silence' and bestselling novels in the Star Wars, Alien and and Predator universes, and more. 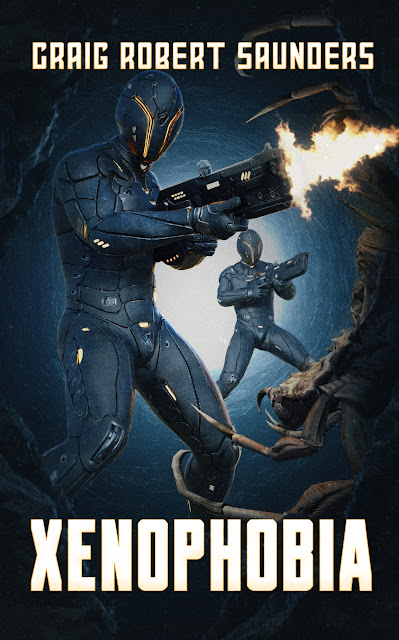 LINKS:
US
UK
Available in eBook and paperback.
A mysterious signal hijacks a deep space mining vessel, drawing ship and crew to the backwater planet 14 Genus. Given no choice but to send a landing crew to the surface, a crack security team enters the dark halls of a secret facility to break the planet's hold on their ship.

Nothing's ever simple for Bits and his team. Everyone in the facility has been brutally murdered.

Bits, half-cyborg, Maul, a giantess, and Salamander the sniper are hampered by the ship's civilian mining crew who they must protect from pirateers salvaging the facility's resources, but the answers to the slaughter on 14 Genus are more terrifying than mere pirates. The facility staff might be dead, but 14 Genus still harbours life.

The landing crew are trapped, hunted, and picked off one by one.

Then, the lights go out.
Published by Severed Press.
No comments:

Why art is important

There's a jay on a tree in spring cherry blossom, confetti petals drifting away in the breeze and that's a pretty thing. It's only nature, but we can appreciate it because there's worth to the image we capture in our minds. For a second, that tableau belongs to us alone.
Whether someone created this thing for us to marvel at or it's merely a random swirling on a grand scale, there's a story and a painting and a song in the whole thing. Those things are love letters from a God, a plane of existence, a grand alien intellect, or some child's wild imaginings sketched on the fabric of the universe.
Every act of imagination, of passion, even for a wage, creates a universe that everyone sees in a different way, and on seeing it we make that thing become as real as the universe itself. Both are worlds we experience on precisely the same level. On the act of creation, whether a thing for the masses or the individual, we make a world. That's something worth treasuring, isn't it? Because, Kevin Costner. I rest my case.
Love you. x 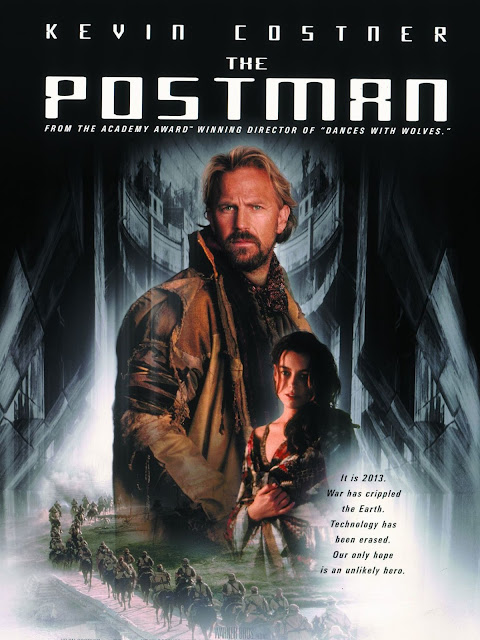 Some Tips to Fight Oppression

You're on the back foot. Realise this before you head out. Your hands are already tied. You can't run out guns blazing against an armoured, militarised fascist force in blue.

Here are some handy tips for fighting a war with nothing but a hardware store and what you have in your cupboard. You can't *attack*, you will lose. They can kill you, though...they will. Don't think this isn't serious, or that they'll have a change of heart. They won't stop, but they don't have to win.

Bring your own equipment. A penknife, superglue, something to bind a minor wound, paint, homemade body armour, your phone (this can be tracked).

For details on anything, YouTube is your friend, but mostly INVENTION. Be inventive.

Blind them with paint. Spray paint, chuck paint, paint bombs. A cop without a visor is as exposed to tear gas as you are.

Have a reassembly point. Organise in small 'cells'. There's a reason insurgents use this method of organisation...it's a damn sight harder for an oppressor to round you all up if you're not just standing around in the streets en masse.

Check YouTube. Check what other protestors and others fighting oppression have done. Invent. The hardware store is your friend.

Build barricades. Slow them down so that they're on foot, not in a car or an armoured vehicle.

Use umbrellas to protect against rubber bullets, but home made armour, too - cardboard in your clothing can lessen the impact.

Don't try to hold onto a friend with your arms around them. If your arms are beaten, you WILL let go. Grab inside clothes. Protect your arms.

Don't forget to protect your legs from impact, too. You can't fight, but you do need to be able to run.

You are millions. Take it in shifts like the cops do. You don't have to protest on your own for twenty hours straight.

There are more. Share things you know, things you hear, things you think off. People need tools to fight, and to do that you have to take away the things which make the police strong - fear, mobility, equipment, vision.

How to Talk to Racists

Firstly, I'm a white man, white-splaining. Obviously this whole post will be old news to many, to black people who live with racism daily, to white people who know better and try to do better. I think I'm one of those, but I don't know. Honestly, I can't say nonsense like 'oh, my black friends'...I live with my family, I have no friends in person (many good ones online) and I barely ever leave my shed. I'm not the best man for this job, no...but I am a man, and I'm here, so whether I want to or not sometimes you just have to do the job before you.

Many, many people (billions, in fact) are better able, and better thinkers, than I. But, I sincerely believe if you have a voice you should use it, especially in these times of fire and violence, of hate and division.

Racism, and yes, fascism, are a fatal plague sweeping the world. Corona/Covid is a terrible thing, but racism is the killer of generations, of whole peoples. A plague doesn't discriminate - people do.

It is, however, worrisome right now that people are alienating 'moderate' racists who could be allies. This is quicksand I'm standing on, I know, but please, if you are able to consider more than hate, and look at the language and the intent behind it, please, if you would listen and learn from a white man, then read on and I hope to God I have the right of this. I humbly ask forgiveness for that which I get wrong, but I sincerely hope that which I get right might be of some use to a mind willing to think around the corners of a house full of traps.

I have, in my little hermit's shed, seen this trap sprung many times before. Here is an example, a very famous example. The vast majority of people didn't even know they were in this trap while they were howling to be let out.

Brexit. Sounds stupid, but the language people used at the time - inflammatory language, vitriol, spite - was more effective in getting the racist agenda through than all the advertisements and soundbites on state-sponsored TV (or, the BBC...). This is where the media, the opposition parties, and yes, people on the streets failed.

There are, in fact, moderate racists. It might be a hard pill to swallow, but your nan who called black people coloured? She isn't, in fact, a fascist sympathiser. She doesn't want black people hung from lampposts.

That guy with the 88 tattooed on his neck? Yeah, that's what's know as an UTTER BASTARD. But your nan isn't.

We, the hopefully right-minded people of the UK, lost to Brexiteers for a number of reasons, but one of them was our intractable holy believe that we were right about everything, that people did not want to be part of the EU because they hated foreigners. They didn't want people on the streets talking Ukranian, did they? They were FUCKING RACISTS.

Call someone a FUCKING RACIST and see how far you get in any conversation to perhaps change a wavering heart after that.

My point is, here, that there are people who make racists pronouncements but they DON'T KNOW, or they are unsure as the right way to speak, or a caring way to think, or a helpful way to move forward. Some of these people have been 'racist' for decades, never thinking that racist terms might be offensive. Some of these people, hard to believe, have never had a conversation with anyone who is not white. Some of them just don't know.

Call them a FUCKING RACIST and see if you get a Christmas card from your nan again.

Talk to her, explain why she's wrong. Some people you'll give one or two or three chances and you'll know that they'll never change. Some, however, will.

My point, my whole point, is that inflammatory language, and yes, violence and resistance, is absolutely needed. But with temperance. You're angry right into your bones. I'm so angry my fingers shake as I type this. But words have power and thought should come above all - even in violence when we lose ourselves to blind anger, we lose the fight.

Some people, as much as you might not wish to believe, or wish to give them a chance to change, are not bad in their hearts. These are the people who could be swayed to be allies, and not enemies, and right now people all over the world, the diaspora of humanity from black, brown, from trans and gay, from deaf and disabled, need allies among those white majorities in their countries, from the straight or male majority.

I hope this makes some kind of sense, but in our fury - and righteous it is - please don't stab your nan because she doesn't understand. Sway those we can. Speak, discuss, think.

That other kind? The ones with the 88s and the nightsticks? Yeah, they're a lost cause. That's the cancer needs cutting out. Not the old guy who might stare funny at a black woman but who will happily help her should she need help because although he might be a racist, he's not a fucking murderous Nazi, just some old ornery bastard who has little sense...but he's not a killer.

Pick your enemies, and your enemy is not everyone. Don't alienate a potential ally. Sound them out. Question them. Let yourself be questioned.

If a motherfucker needs a smack then do that later, eh?

Love you.
No comments:

Just a short post to keep you up to date. I neglected the old bloggy last year and I'm trying to update more regularly.

I said 'newsies' and 'bloggy' already. As you might surmise I'm not feeling it. I'm trying to beat an unwilling novel into submission at the moment, which is a nasty simile, isn't it?

Severed Press will publish the second of my three contracted novels this year - Xenophobia.

I also finally got to making paperbacks for 'Ghost Voices' and 'Hush'. Nobody bought Ghost Voices, which is a shame because I liked that novel, but I still need a paperback because I'm a completionist. People did buy Hush, which I'm chuffed about because I honestly think that's one of the best things I've written.

I re-did the cover for 'Ghost Voices', too. 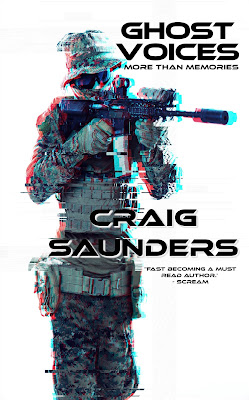 That's it. That'll do. Otherwise, I've a few submissions out and about. Current job is a novel which will wing its way to Thunderstorm for a yay or nay. After that a rewrite request from a publisher, and then the next thing...which depends on the submissions and the like.